SIX OF ONE HALF A DOZEN OF THE OTHER 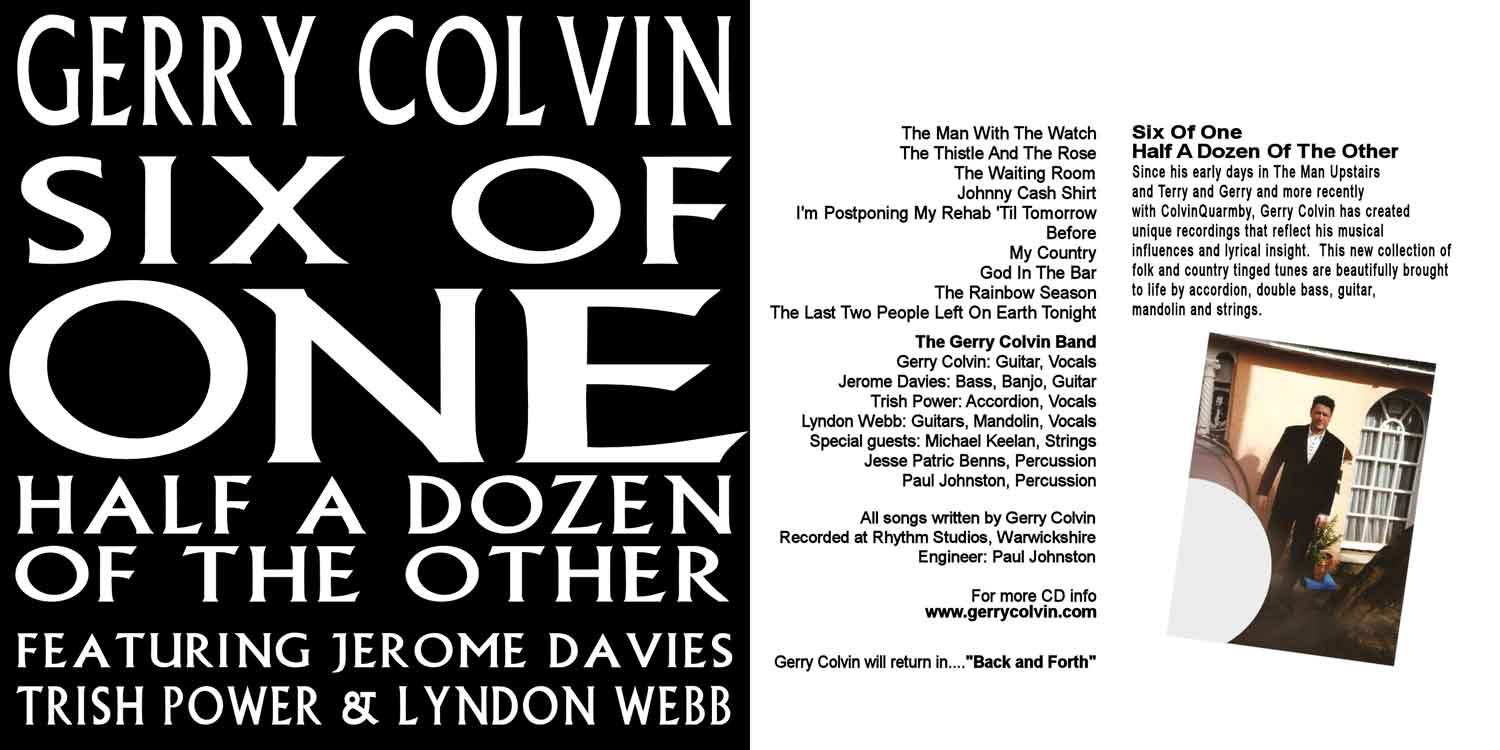 "Six of One Half a Dozen of the Other" is out now. Scroll down for a review and lyrics, and then go to the "Shop" page to get your hands on it! 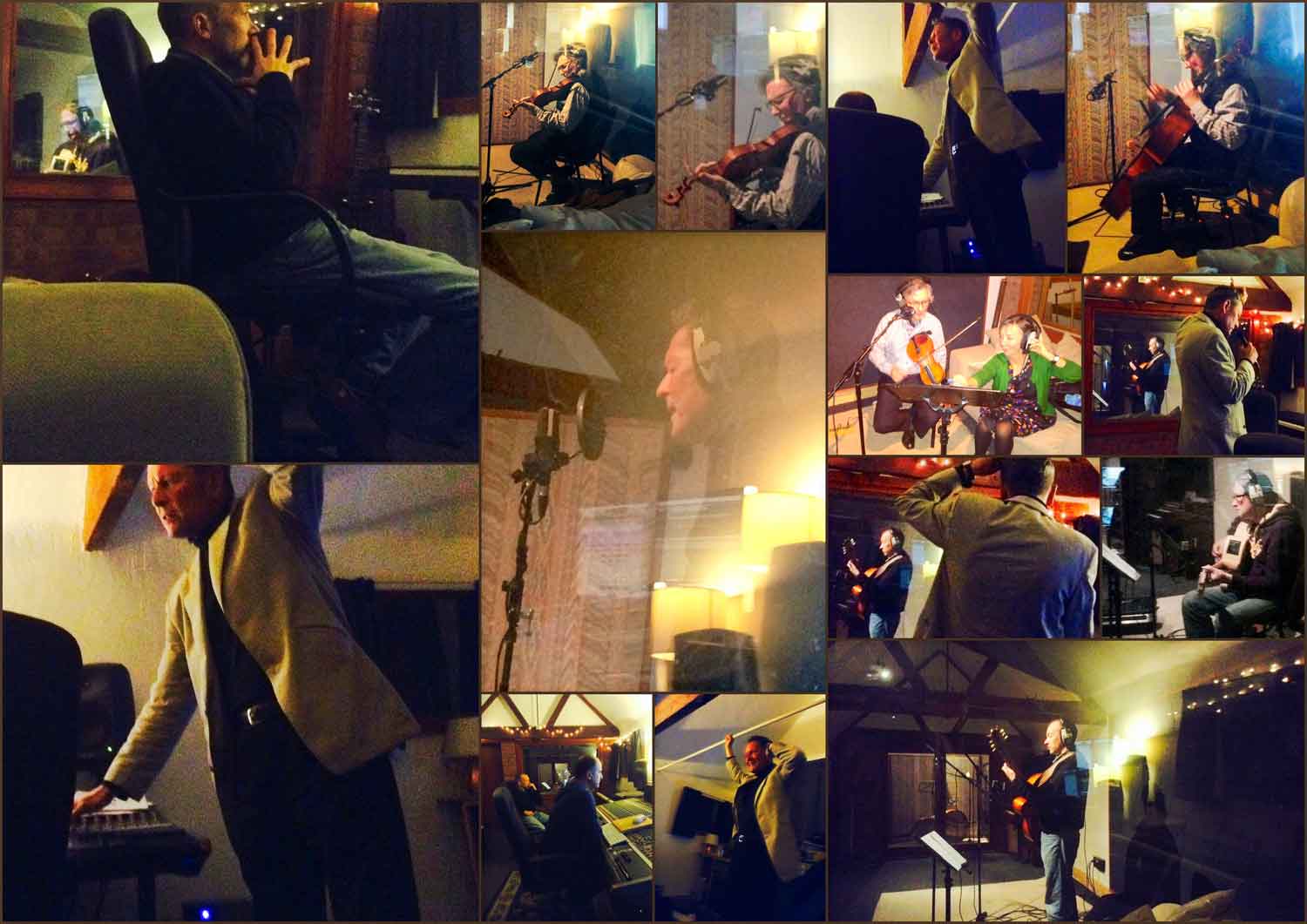 "Let me say this from the start, I've known Gerry Colvin since way back in the 70s when I saw him fronting The Man Upstairs at a Melody Maker battle of the band contest. Since then I've seen him record and perform under a variety of different guises, as Peel favourites Terry & Gerry (now reformed), then as The Gerry Colvin Inexperience, The Atlantics, and, most recently, Colvin Quarmby. Throughout, he's consistently proven not just a true showman and entertainer, but one of the finest songwriters this country has ever produced, his material embracing the caustically political and the melancholically romantic. Further proof arrives with this, his new solo album, a follow up to Jazz Tales of Country Folk, and his first since putting together a new band following Nick Quarmby's decision to retire from the business.

Featuring Jerome Davis on double bass, Lyndon Webb on guitar, Michael Keelan on fiddle and his sister Trish (here rechristened Patricia Power) on accordion and backing vocals, it is, as the title suggests, a musical mixture (country, folk, jazz) but wholly excellent, displaying both his gift for a memorable melody and his skill with a lyric, sometimes playful, sometimes profound, and sometimes piercingly poignant.

Things kick off with a highlight among an album stuffed with them, Keelan's throbbing fiddle introducing the tumbling folk-rock strains of 'The Man With The Watch', a song inspired by the true story of a wristwatch that stopped at the exact moment his then girlfriend left him. Featuring a lovely acoustic guitar middle eight straight out of some Texican cantina, I could hear this in full stadium crowd singalong flood complete with trumpets.

Then it's over the Trish's accordion to lead into 'The Thistle and The Rose', a lovely slow waltzing Celtic hued number he wrote as a reflection on the Scottish Referendum about the ties that bind the two nations, referencing Alan Breck, the hero of Stevenson's Kidnapped, as well as making the wry observation that the former and current leaders of the SNP both have fish sounding surnames.

Things take a poignantly personal note for 'The Waiting Room', another gently lilting number with a slow shanty sway, written about his visits to his dying mother when she was in hospital ("one tiny hand reaches out to me, the person inside still the same") and the awkwardness of having so much to say, but not the words.

After the emotional weight here, some welcome light relief comes with the country bounce of 'Johnny Cash Shirt', a suitably Cash-like chug through a song inspired by having met a guy in Nashville who collected clothes and other items that once belonged to country stars (he apparently also had Elvis's inhaler) and subtly commenting on the nature of obsessive fandom.

He stays in country territory to mine the genre's staple theme of the ambivalence of alcohol on the barroom waltzing 'I'm Postponing My Rehab 'till Tomorrow', a song about prevarication that also serves as a lament for the traditional pub (dartboard replaced by widescreen TV) where you could seek refuge, ponder over a pint and buy a snack from the peanut girl as well as featuring the witty word play of "opticsmistically staring at a half empty glass."

With a guitar riff that calls to mind The Monkees' 'Pleasant Valley Sunday', 'Before' has a definite Dolenz feel on a song about those niggles and anxieties that often plague long-term relationships and the wish to get back to how things used to be. It's also, quite possibly, the only song to mention Wile E Coyote from Road Runner.

The mood shifts for the more reflective 'My Country', essentially a love song to England and its people that are its earth etched on a simple acoustic guitar refrain with a gorgeous fiddle solo from Keelan, apparently written in an aeroplane toilet while travelling across America.

Then it's all change again with the frisky hoedown and Grapelli fiddle break bounce of 'God In The Bar', a playful number (that includes namechecks for The Last of the Summer Wine, Benny Hill, Jeremy Corbyn, Usain Bolt and Alfred Hitchcock) about a God (who sports a tattoo of Mary) drowning his sorrows in Satan's Tail, a celestial saloon just south of Eden where the barman's Dean Martin and the waitress Jeremy Clarkson (OK, he's not dead yet, but it's an amusing vision), bemoaning to Gabriel about the big mistakes that seemed like a good idea at the time, like kipper ties, Edward Heath, PPI, ….and mankind.

On a more sober note, 'The Rainbow Season', the longest track at almost six minutes, complete with a na na na backing chorus, is a strummed, agriculturally-themed brooding meditation on how complacency born of years of prosperity has seen a shift in the world economy with the rise of new markets in the East.

The album ends with the dreamily romantic, guitar and accordion arranged and jazz-tinged twilight time of 'The Last Two People Left On Earth Tonight', a song that (inspired, I suspect, by Bill Evans jazz classic 'The Two Lonely People') is almost as lovely as Colvin Quarmby's 'Watching Feathers Fall From Angels', one of the loveliest and most serene love songs ever written. I could hear this being sung by Tony Bennett. Available from Colvin's website, it's unlikely to cross the horizon of the multitudes, but those who discover it, admirers old or new, will find themselves amused, touched and enriched in the listening."

The Man with the Watch (Gerry Colvin)

The Thistle and the Rose (Gerry Colvin)

Can you hear? Can you hear? The lament from the loam
On the lips of the men who long to journey home
They sleep in the soil but their hearts fly aloft
Back to the burn the valley and croft

I should have been the fourth in the Tennessee Three
Highwayman or a rockabilly
He said to me at The Grand Opry
‘Do I look like you or do you look like me?’

Cos I’m wearing Johnny Cash’s studs
Out of respect and a thing called love
It’s got my name there on the back
It says my name is J.R. Cash

I’m postponing my rehab ‘til tomorrow
I consider it the best course for me
Today I will spend with a few passing friends
In a place we call debauchery
You’ll always find me in the same spot
The bar stool with the wobbly leg
Optic-mystically staring at a half empty glass
What a fine way for happy hours to pass
Cos I’m postponing my rehab ‘til tomorrow
It’s a plan and it’s working for me
There’s a circle of holes on the nicotine walls
Where the dartboard used to be
Sometimes I feel just like that board
Sometimes with the holes I have affinity
So I turn down the sound on the widescreen T.V.
Fold my crisp packet meticulously
Then I line-up them beer mats like a cemetery
Never understood why that’s important to me
‘til I postponed my rehab ‘til tomorrow
It’s a plan I’ve worked out perfectly
Net caught in our own drink like a fish bowl
Reaching new heights in our all-time low
The bell never rings in this watering hole
Yesterday today was tomorrow that’s how time’s called
Cos postponing my rehab’s one thing on a list
Of things I will do the day after this
The peanut girl’s our Virgin Mary
With each purchase she miraculously appears
It’s the topic of talk ‘most every day
I buy the last snack ‘cos I’m not coming back
Cos I’ve postponed my rehab for twenty-four hours
It’s a plan always sounds good to me
So buy me a beer ‘cos tomorrow I’m not here
It’s a plan and it’s working for me

And it’s a feeling that cannot be explained
It’s just the only love that never fades to grey
And in the dark time when you turn your back on me
And we disagree. You’re still my country

The miner at the seam the fisher-folk upon the sea
The men and women protecting me
And those who died for my liberty. They’re all my country

God in the Bar (Gerry Colvin)

First he took up smoking then he took up drinking
Then he gave up everything he loved
Then he gave up faith charity and hoping
And his nom de plume ‘The Man from up above’
They found him in a bar room just this south of Eden
In a place he’d created called Satan’s Tail
Where the barman was Dean Martin, the waitress Jeremy Clarkson
And the band was Elvis, Mozart and J.J. Cale
Gabriel took the next stool folded his wings tried to look cool
And asked God ‘What the hell was going on?’
God didn’t answer well he rarely does
He just went ‘Shhh’ and ‘Listen to this song’
And when the band struck up again this was God’s Kurt Cobain refrain
I’m sorry that the rain ran on rainbow trout
I’m sorry ‘bout the way that things turned out
I’m sorry ‘bout blocked drains, back pain, late trains and kipper ties
But it seemed like a good idea at the time
Then the brave angel asked him why
He put two ‘p’s’ in apple and only one in pie
And how come Usain Bolt never gets a stitch
And how come Gerry Colvin don’t wanna be rich
And God turned on his bar stool and tipped his hat
Showed a tattoo of Mary and said ‘How about that!’
And he said he’d made mankind just for a laugh
From the bits left over after the giraffe
And when the band took a break God laid out his big mistakes
I’m sorry that you think that I let you down
Just can’t think how to turn it around
Sorry ‘bout the Kennedys’, strip-tease, bad knees and PPI
But it seemed like a good idea at the time
Benny Hill and Alfred Hitchcock did a Morris dance with Mr Spock
And everybody wondered if they were in Heaven or someplace else
And God moonwalked across the floor well he moves in mysterious ways
As Mozart on the harpsicord played the theme to ‘Happy Days’
And when the band returned again God sat down and began to sing
I’m sorry that I can’t give you what you want
But it got more and more as time goes on
I’m sorry ‘bout teeth, Edward Heath and ‘The Last of the Summer Wine’
But it seemed like a good idea at the time

Seven secret colours hiding in the sky
What else is hidden from us as the clouds roll by?
Na na it’s the rainbow season